Oh Man Oh Man…..
Being a mama is no easy J. O. B. but honestly I wouldn’t trade it for anything else in the world!
This kid makes each day brighter & better that’s for sure.

Now, getting him to sleep in his own bed might be a different story HA
It’s a complete roller coaster.
Day 1: After bath time, reading and a little breastfeeding top off. We take him up to his own bed at 9pm. He has trouble falling asleep. So a few trips upstairs to check on him & console his screaming watch him yell at us, it takes 30 minutes but he’s out. A small wake up around 4am had me in to check on him and feed him a little but he went right back to sleep with me (I know bad mommy!)
Day 2: He was put upstairs at 9pm and 5 minutes later… Out. Then around 11:30 he wakes up to fuss but as I watch the monitor for 10 minutes he gets himself right back to sleep for the entire night on his own. HIP HIP HORRAY  I actually stood over him in the morning at 7am (with my boobs ready to explode) just seeing if he was still breathing. Of course he was and he slept until 8:40am. Lil Turkey
Day 3: Up to bed once again at 9pm. Again he has some trouble getting to sleep it takes 35 minutes this time. But soon he’s out. He wakes himself up at 11 and we don’t go up just let him fall back asleep. Then he wakes again at 1am, still I let him fall back asleep. When he wakes again at 2:30, mommy is just plain tired, in to bed with me he goes. Gosh I need to get tougher! We still had a rough night after that. He just seemed to be restless and had trouble staying asleep. I’m contributing it to the fact that he only had 2 solid meals this day. So we were a little off schedule.
Day 4: He got fussy a little earlier so we had a bath around 8:15 and then by 8:30 he was in bed. He thrashed around a bit but by 9 was asleep. Again he woke around 11 and put himself back to sleep. But this time he stayed asleep all night. And I heard him starting to peep around 8:20am. Yay! Mommy got so much sleep!
Day 5: After an eventful day (see …… post) he was all ready for bed at 9pm. 15 minutes later he was out. Around 11:15 he woke up for only 10 minutes or so. And stayed asleep until 6:30am. When I heard him crying I gave in and brought him to bed with me until 9am.
Day 6: He got extra fussy by 8:30. So once again 9pm ready for bed. It took him a little longer to fall asleep this night. It seems like he alternates between 5-10mins and 30-45mins. But once he let himself he was out until 12:15. Then there was a 30 minutes wake up, which he soothed himself (after a bout of screaming) and stayed asleep until 8:30am.
Day 7: Being that it was Father’s Day our routine was a little off but we still managed to have relaxing time around 7 (while watching game 5 of the NBA Finals of course) and Cash was in pjs and in bed by 9. This time he didn’t scream and cry just laid there calmly playing with his hands and the crib until he fell asleep. Maybe he’s getting used to it! This time there was no middle of the night wake up. He slept right through and around 6:30 or 7 I heard some fussing. Pretty darn good I’d say! 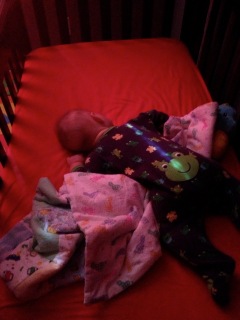 And after one full week…. I’m ready to report…. Our kid seems to be adjusting well to his own bed.
Some nights are definitely easier than others. And we realize that no 2 nights are the same but it’s getting easier. So is nap time. He will go down in his bed for a nap right in the middle of the day. I have found that the better we are with his meal routine the better he sleeps. Plus I’m stocking up lots of freezer milk, my hope is that he will have nighttime breast milk bottles until he’s a year old!