ha. ha. ha. Toddler Beds are a joke!!
This post was actually started in December 2014.
But being that it’s been an insane roller coaster of sleeping adventures with Cash I’ve never been able to finish it. So the draft that has taken me 6 months has now become a reality. Enjoy.

here’s what I started right after his 2nd birthday >>>>>

Guess what….We finally decided to take the plunge and change one side of Cash’s crib. He now has an easy escape. Honestly it was changed when we first moved in October but I was just too chicken to let him run free. Now that he’s officially 2 I figure why not. Lets give it a shot. Plus we only have 5 months to get him used to it and potty trained before little brother arrives. Once baby shows up we are bound to have some regression. I’m just hoping it isn’t too bad.

Night one complete success.
Night two not so much.
Nap time gone.
Most nights and occasional naps he chooses the floor 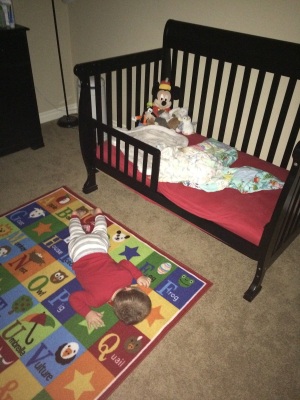 Here we are 3 weeks later… post Christmas in which we got him a brand new Mickey Mouse bed
At first it was a hit! But that lasted through a nap and a few nights.
Eventually it was only floor sleeping. Naps we let him stay there. But every night once he was asleep Brad would move him to his bed so he didn’t wake up crying.

Nap time no longer exists, just a state of so tired that everything is a whine.

Occasionally he will give in and fall asleep in his bed. Only to wake up once he moves around.

Yet… It’s a few weeks later now. Nap time has returned (along with mommy’s sanity). We are just struggling a little with staying in bed at night. Along with the early morning wake up. Part of me wants to switch him back just so we can all sleep in a little more. The other part knows that he will adjust eventually and start staying in his room as long as I stay firm in the process.

And the napping roller coaster continues. I feel like at this point I might want to start this entire post over. He plays, begs to watch movies with us or just yells until he passes out. Anything to avoid taking a nap or falling asleep when he’s supposed to. 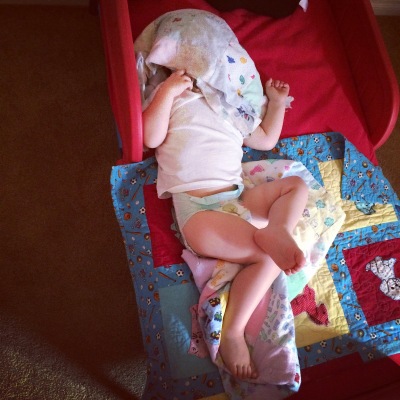 And that is where I pretty much gave up on this post. And I repeat the first statement.
Toddler Beds are a joke.
After months of ups, downs, twists, turns and multiple nights of me wedged between the two little ones after the house waking up to a toddler screaming at the top of his lungs…  we went new bed shopping. Got the kid a full size bed, let him pick out new sheets (adorned with trucks & cars of course) and hyped that thing up as much as we possibly could.
As you can tell from this dark, grainy photo it’s working!!!!

Here we are 4 nights in… he’s sleeping through the night and taking 2-3 hour afternoon naps.
SUCCESS!
I can’t tell you the joy I feel. Not that I’m getting much more sleep.
But at least we are all on track to do so.
Moral of this story…    Cash-1  Mom & Dad-0
He will seriously have this bed into his teenage years! Anyone want to buy a Mickey Toddler bed?
ha.
Have a wonderful weekend friends!!
Bye for now!
-xo-
♡Jennifer